The lack of guests has made us appreciate just how vital they are to a hotel. “You become very aware of the fact that it’s just a building when there are no guests. It’s great to get the work done and give everything a refresh, but the life and soul of the hotel, is the guests and the team that work here.”

The world has changed immeasurably in the past few months, and nowhere has been more affected than the hotel industry. With the country’s hotels forced to close their doors in March, and foreign travel only just now becoming viable again, it’s unclear when – or even if – things will get back to normal. Indeed, the current lockdown has resulted in some strange living arrangements; adult children living with parents, unlikely roommates forced together, extended families cramped under one roof.

That strangeness has extended to the Press Up group, where, during the lockdown, two managers stayed in their hotels, hospitality castaways who, despite the strange circumstances, have adapted to a new normal weirder than any of us could have forecast at the turn of the year.

Located in the row of imposing Georgian townhouses that make up Harcourt Street, it’s fair to say The Dean was something of a game changer on the Irish hotel scene when it opened nearly six years ago. Dave O’Keeffe, from Cork, is the hotel’s general manager; he moved into the hotel the day before St. Patrick’s Day, when it became clear that the hospitality industry was going to take an enforced hiatus. “I moved in initially so I could lend support to the team here, and once we made the decision to close, I stayed here to take care of the building.” 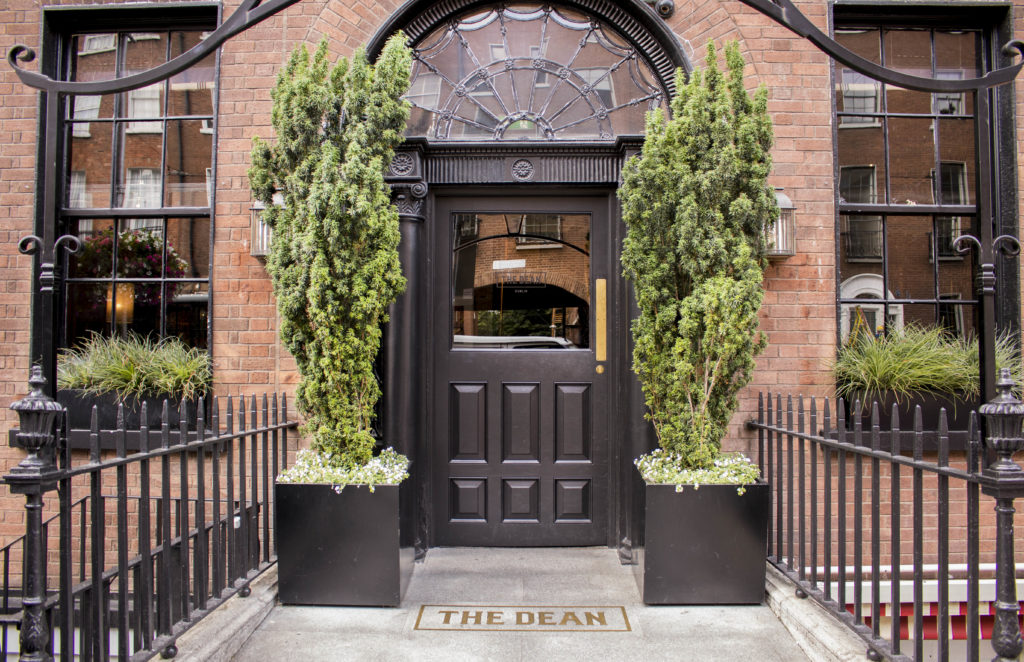 The Dean officially closed on March 23rd and reopened again to guests on June 29th. Throughout the lockdown, Dave had used this time to be as productive as possible. “It’s a good opportunity to get work done in the building, on jobs big or small that we didn’t want to do before, as they would have impacted on guests. For example, we are getting a lot of work done on Sophie’s, so that will have a refresh before we re-open.” The lack of guests has made him appreciate just how vital they are to a hotel. “You become very aware of the fact that it’s just a building when there are no guests. It’s great to get the work done and give everything a refresh, but the life and soul of it is the guests and the team that work here. 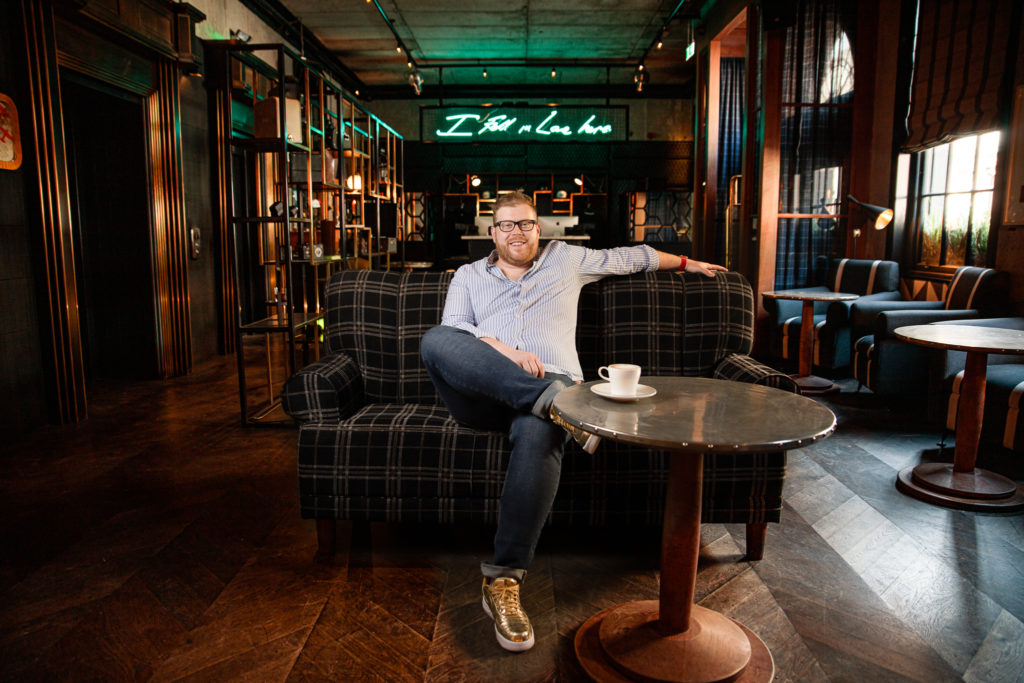 It hasn’t been soul destroying – I love the building and I love what we do here, and from that point of view it makes it easier, as we can see the progress being made on a day-to-day basis.” Coronavirus will of course have a huge impact on the hospitality industry globally, and Dave and his team have used the time to start thinking of ways to adapt to what will be a very different post-pandemic world. “Over the past few weeks we have had to re-evaluate pretty much everything, from the clothing that housekeeping wear to how we cater for our meetings and weddings and events,” he says.

“We have a totally different approach to how we are cleaning the building and servicing public areas; everything has to be broken down and reassembled with a different perspective, just so we can be sure that everyone is safe and secure.” Guest interaction will also change, he says.

“We have so many regular guests, and in the past, when I would see them in the lobby, I’d go over and give them a hug straight away, but now there’ll be no physical interaction. We have to make everything as comfortable and seamless as possible while still functioning as a hotel – it makes you realize just how many interactions we have with guests,” he adds.

Indeed, even something as simple as check-in now looks fraught with difficulty. “Now we will have to sanitise room keys and put them in key wallets for the guest to take, and of course we can’t hand the keys to them directly; we’ll have to place them on the counter. We’ll also have to make sure we are keeping our distance when we go over to have a chat with a group at a table.” For Dave, the lockdown has allowed him to take a step back and think about how The Dean should operate in the coming months. “As a hotel business, we rely a lot on our corporate travellers, especially from Sunday to Thursday, and now people have proven very successfully that they can work from home, so I think business travel is going to disappear a little bit,” he says.

He is optimistic that The Dean’s offering will resonate with the domestic market when the country starts to open up. “We are well supported in the domestic sense, and the majority of customers are a fairly even split between Ireland and the UK. Depending on the time of year, that’s followed by North America and then places like Germany and Scandinavia, where our design aesthetic really appeals. For the moment, we really need to hone in on what the domestic guest is looking for and make sure we are giving great experience and good value for what they are getting. We need to make sure the offer we put out there appeals, as we have Sophie’s on the rooftop where you can have your dinner and drinks and weekend brunch; we’ve also got our Dean bikes, so guests can explore the city.”

Dave has been trying to use the time as productively as possible, and of course, his lodgings could be a lot worse. “I had been living in the penthouse,” he laughs. “The fortunate thing is the penthouse is kitted out with a kitchenette, so I can cook if I want, which makes it a bit more like home.” Not that he has been cooking as much as he might have. “I have been a fairly good customer of Doolally and Wow Burger,” he says.

“If you had said to me two months ago, I would be living like a castaway, I wouldn’t have thought that it was going to be appealing,” he says. “But, it’s been very comfortable; I try to avoid watching the news during the evening, and instead try to get a lot of stuff done to keep busy and active. I brought a guitar down from the penthouse, just to play songs in the lobby to entertain myself in the evening. I think we are all that bit tougher than we realise.” 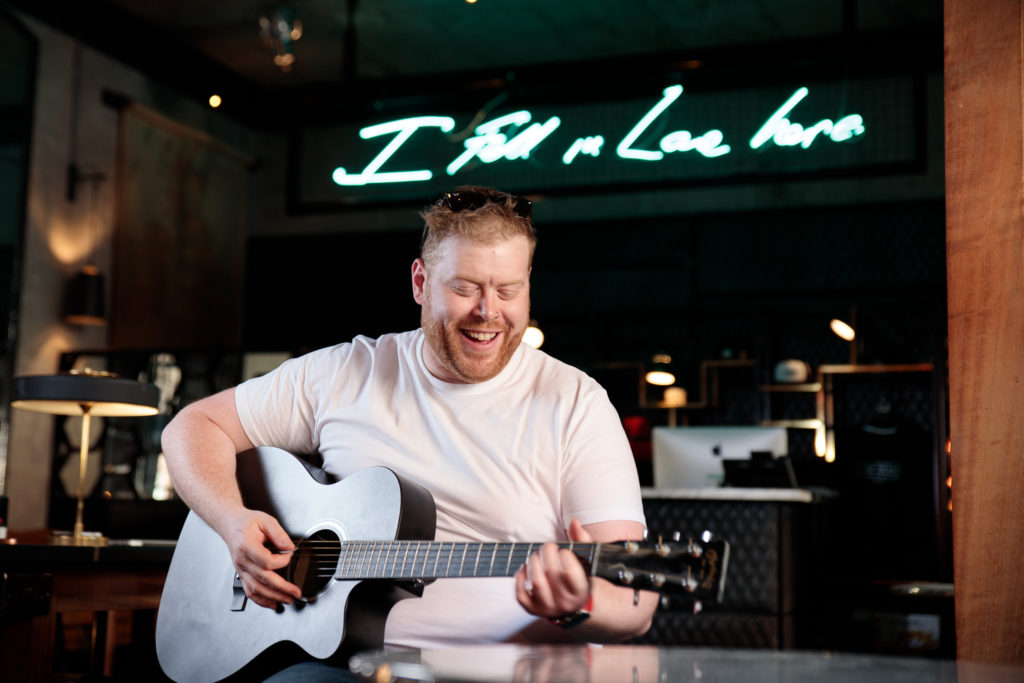 While Dave is holed up on Harcourt Street, Adrian O’Connor is living 2km away in The Devlin, located in the heart of Ranelagh. Adrian, from Enniscorthy has his husband for company; both having moved in on March 16th. The decision made sense for a number of reasons. “We knew we were going to have DIME coffee hatch open for takeaway coffee throughout the lockdown, and so that was an opportunity for me to represent the hotel during a really odd time,” he says. “I felt it would be better that I – as the hotel manager – was there to run that. 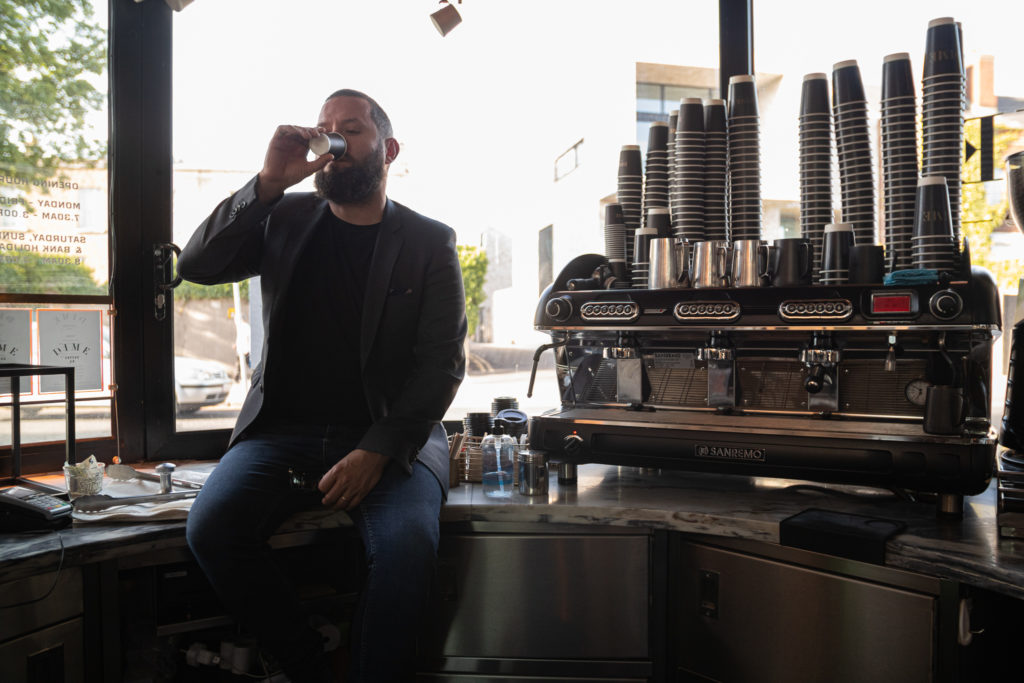 Also, I think I was the only person to know enough about the hotel to figure all the things out in terms of the running of the place.” Adrian’s days – dominated by running DIME – are fairly regimented. “I’m up every morning at 7am, and the first thing I do is open windows and open curtains; I’m not sure if that’s the country part of me or not! Then I go downstairs to DIME and turn on the coffee machine, check stock and I open at 8am. I’m there all day making coffee. There’s not a huge amount of time to do much else after I’ve closed and cleaned everything up. I have noticed that dust seems to appear from nowhere, so I generally try to clean something every day.”

For Adrian, serving coffee from the hatch been the bright spot of the lockdown.

“I have got to know pretty much everyone in Ranelagh at this stage, or at least anyone who drinks coffee. And those regulars are still coming back, even though lots of their coffee shops are now doing takeaway. I think it was good to open in terms of the sense of community, which sounds trite but it’s actually true.

Before all this, I would have gotten to know a certain amount of regulars in the hotel, but it’s always just a passing nod hello or quick chat, whereas in DIME, it became at one stage ‘come by and tell me all your problems.’

That was really cool for me to experience. If it was just me going in and making coffee, it probably wouldn’t have kept me engaged for very long, but being getting to know all those different people – and they are really sound bunch – was great.” Indeed, the hatch became a therapeutic outlet for many customers. “There was a lot of giving out about husbands and wives and children, dogs and canaries!” Adrian says. 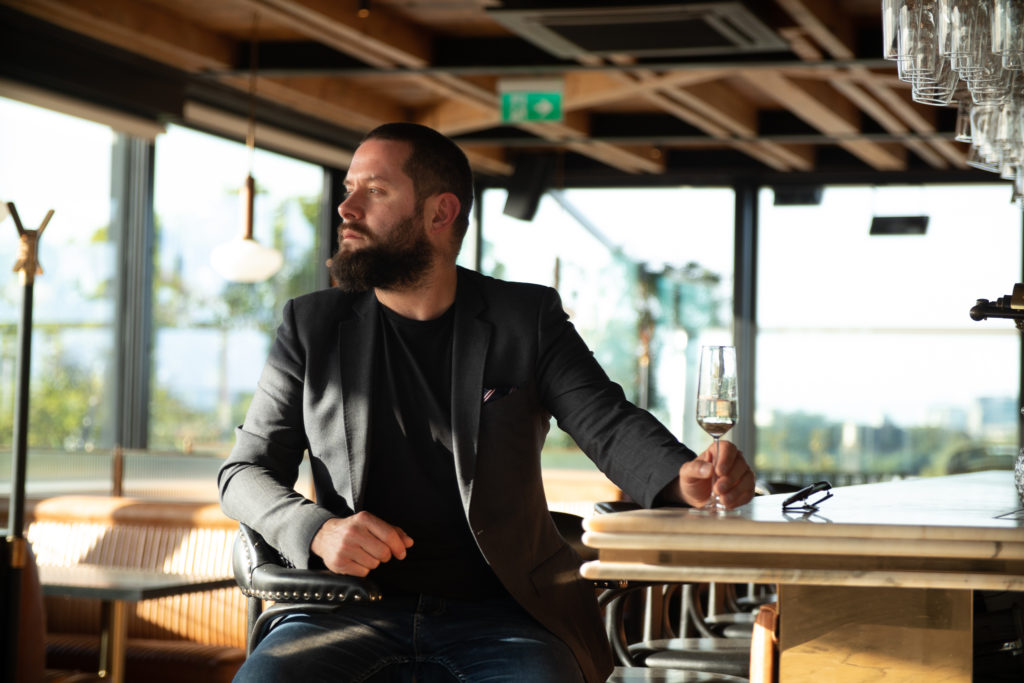 For Adrian, living in the hotel has been something of a learning experience. “There were things I have had to learn how to do, such as how to drain the dishwashers and how to upgrade boilers and lots of different things like that. So that’s been a big positive as I have a lot more knowledge about how the building works.” Adrian, who has been sleeping in a “quiet, back corner room” – there’s no penthouse in the Devlin unfortunately – hasn’t really had the time to learn anything new about himself. “I wish I could say I took up classical French cooking or long-distance running, but I haven’t done anything like that.

I was taking a fairly relaxed view about what’s happening, I never had a meltdown, but I am here with my husband so that helped. And there are worse places to be stuck.” Adrian is somewhat optimistic about what the post-pandemic future will look like. “I think we are ideally suited to coming out of this lockdown – a lot of the regulars would comment on the space we have here. It’s a new building, there’s lots of space with high ceilings and it feels clean and somewhere that people would be happy to go to,” he says.

“One of the advantages that Press Up has is that it’s part of a new wave of hotels which appeal to younger people. In general the market is getting younger and they are not looking for a traditional hotel to stay in. They want a great meal, they want music, they want something happening in the hotel; and they want more experiential and city based stuff. Like every hotel we are looking at our markets – who our customers are and how to get to them, and that will be a challenge. In general it’s not great news. Long term, I don’t think anyone knows how it’s going to shake out.” 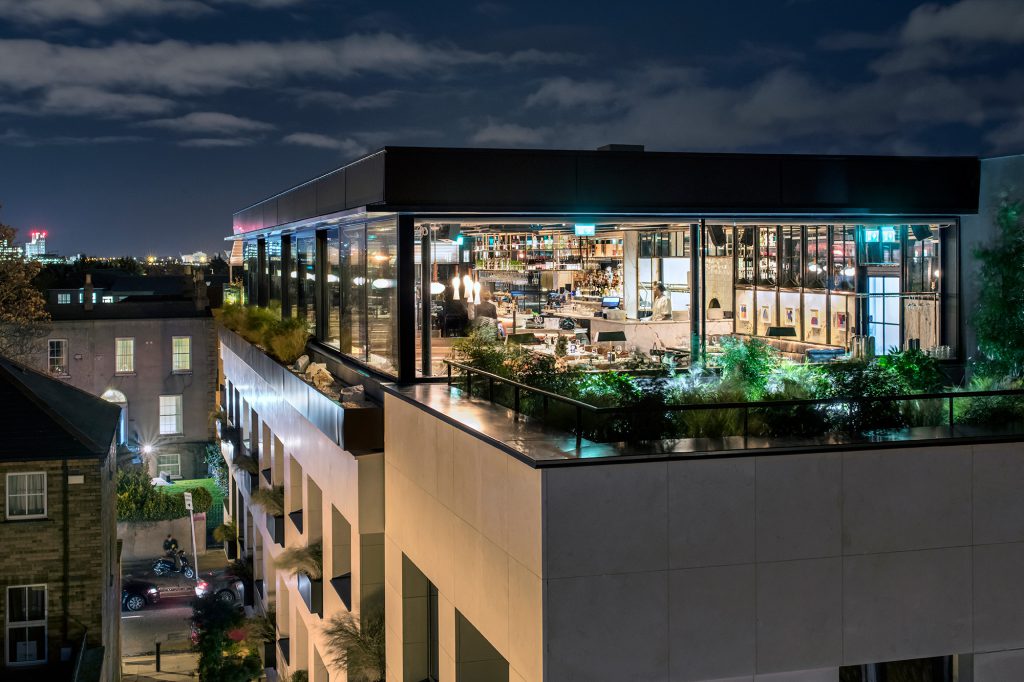 The Dean located on Harcourt Street, Dublin 2 were delighted to reopen their doors to guests again on 29th June. The Dean is giving guests and locals every opportunity to fall back in love with Dublin with their range of special offers and package add on’s. Be sure to check out their ‘Explorer Guides’ curated from our very own locals of Dublin. For best available rates & special offers, click here

The Devlin in Ranelagh, Dublin 6 will reopen for hotel bookings on 1st September, with their restaurants Layla’s & Americana open for reservations from 29th June. For best available rates & special offers, click here